The Voie Petit, My route to the summit

Our view from the million star hotel: the Bonatti ledge at mid route

Yesterday I finally stood on the top of Grand Capucin, with the incredible realisation that I had succeeded my long term project.

I grew up as a sport climber, on a tropical island in the indien ocean, and one year ago I set myself the incredible project of doing the Voie Petit, an alpine route at 3500 m of altitude, 8b max, 450m long. And nothing else than the hardest high altitude rock route in the alps.

Why did I set my eyes on a piece of rock where I had none of the skills required: no alpine experience whatsoever, no knowledge of the granite rock, no endurance in general?

The Voie Petit is the creation of Arnaud Petit, an immense climber, a world cup winner and a mountain guide, a man who succeeded to reconcile two worlds who often look down on eachother : rock climbing and alpinism.

Arnaud and his partner, Stephanie Bodet are the sparks that lit my fire : having them as raw models, there was only a step to do to begin looking at their routes. And so I did, and there it was, a dream in the air : The Voie Petit. 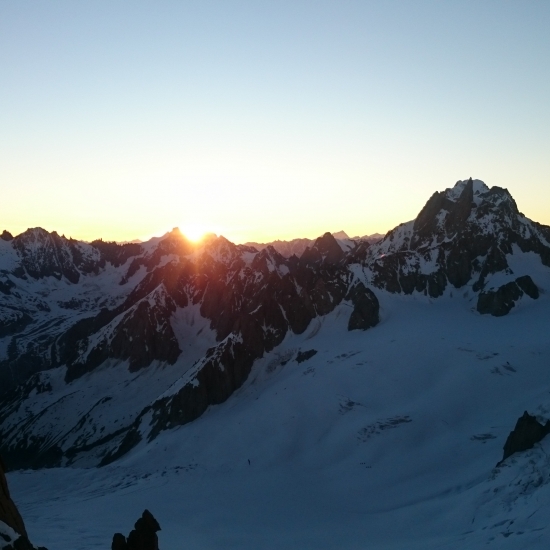 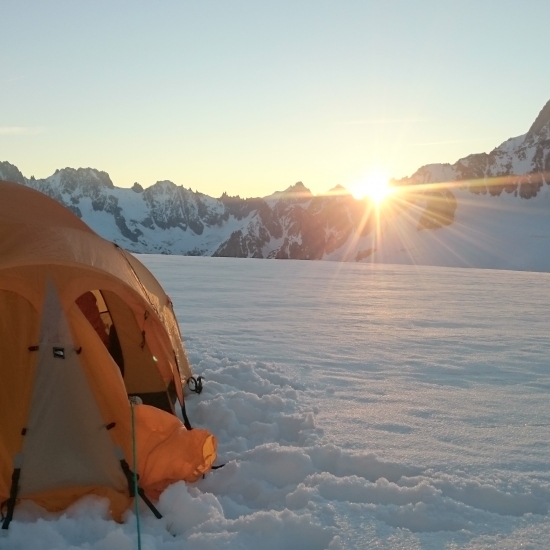 450 meters of rock, yes, but with a little detail where I am a fish our of water: ice and cold!

I have been compeeting for 10 years in the climbing lead world cups, I have won, made podiums. But there is a world between an 8min exercice on artificial walls and free climbing a vertical or overhanging wall of granite above a glacier.

So when I set myself for the route last year, I made a plan : I had to learn all the skills that I missed, and the list was long, from walking on ice with crampons to climbing very, very far above your last protection, with the knowledge that injury would be the likely result of a fall.

And I trained, for a full year, with my goal in my mind every morning when I woke up. I had set myself a few rules, because big wall climbing is full of shades of grey, and you are the only one who shall decide on limits : I could count on my indefectible partner, James Pearson, my husband and best climbing partner, to support me and belay me. But it was my project, and I would be the only one to first recognise the movements of the route, to place the rope in dangerous sections. I wouldn’t use an easier route on the left or on the right to short cut the recognition phase. I would climb only in the route, by my own possibilities. Quite simple really: I go from the bottom to the top, and if I can’t pass a section, I can’t go up! 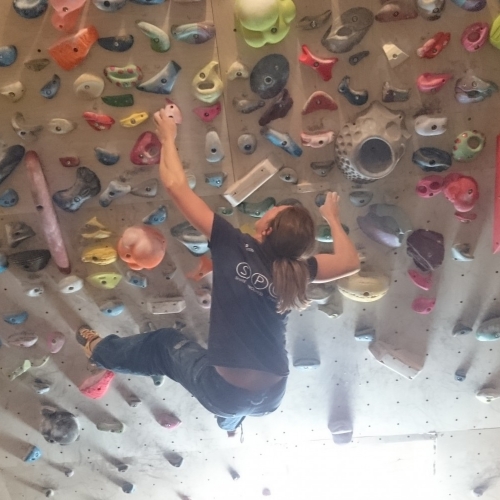 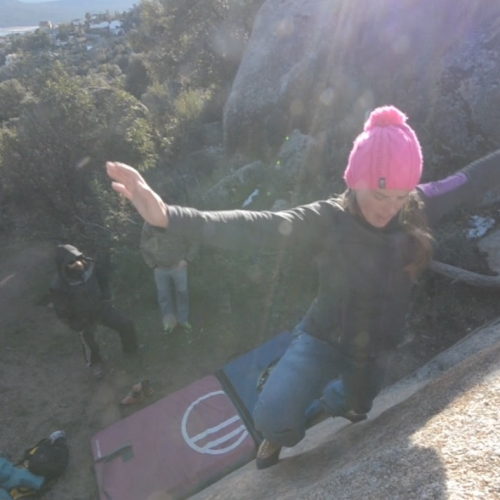 My strategy to prepare for the voie Petit: from training in my gym to learning the secrets of granite friction in La Pedriza…

In total, I have been 4 times in the route, 2 last year, and 2 this year, to learn the movements of every pitch *. Last year, it all seemed like the moon to me, but I trained, and I trained right. Most of all, I have done a lot of mental preparation, reusing all the things I have learned over my competition years: visualising made me a pool of energy to dig from on D day, and I was handling the fear of danger like I used to handle the fear of failing in competitions.

I did rest on someone I entirely trust for all the areas where James and I are only beginners: weather, security on the glacier, altitude management are all the skills of Marion Poitevin, a young mountain guide, and even an instructor for mountain police rescue.

I could count on her for advice, just like I could count on Arnaud and Stephanie Bodet for the route’s specifics, but more than that, they have been pushing me, that all 4 of them, with James, deeply wanted me to succeed. 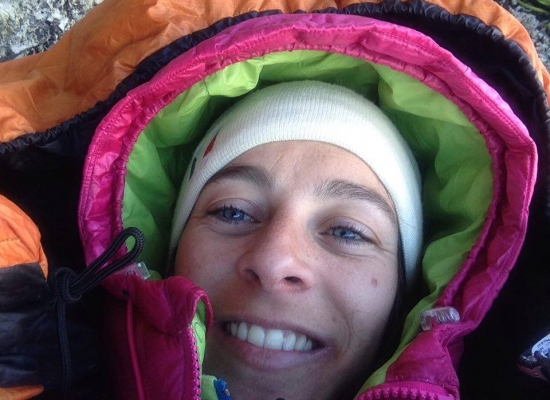 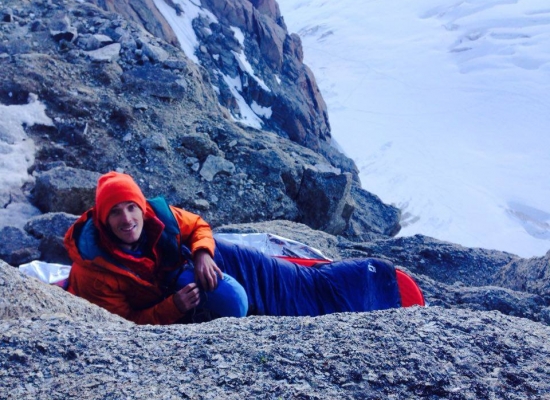 Marion and James, my parters/cheerleaders/advisers/hauling beasts:), both ready to sleep on our ledge.

On my final try, 2 days ago, Marion had called me to tell me there was a weather window.

I had been planning on simply going in the route to check out the last 150meters, that I hadn’t reached yet, stopping and using the ropes that I had placed on the lower parts of the route. But Arnaud called me, and suggested that I should already give it a serious try on the first part, and then sleep on the Bonatti Ledge at 2 thirds, to try to free climb all the last pitched on the second day.

Marion came with us, and as we had much bigger bags for the bivouac on the wall, she could help James manage all the logistics of hauling the bags up. I only had to lead, they would follow me.

I reached the crux pitch, the 8b, and focused simply on “just try”. It was an exhausting battle on that pitch, I nearly blacked out on reaching the belay, a combination of effort and altitude, but I had done it. I had succeeded on the hardest pitch, I had a chance.

To succeed on a multi-pitch route you have to succeed to free climb each pitch, in the order, in one push.

So at that point, I still had 8 pitches to succeed. But I felt all the motivation from my year of training pushing me up, and in 2 pitches (7c+ then 7b+), I reached the ledge.

I had never slept on a ledge, and was looking forward to the experience: you haul up bags with sleeping bags and mats, down jackets, a stove to melt the snow that remains on the ledge and cook your dehydrated dinner. You sleep with your harness, on your tiny 80cm wide ledge and 400 meters of air below you. If you slip, a rope will save you. What you can’t stop looking at is the mountain panorama jumping to your face. 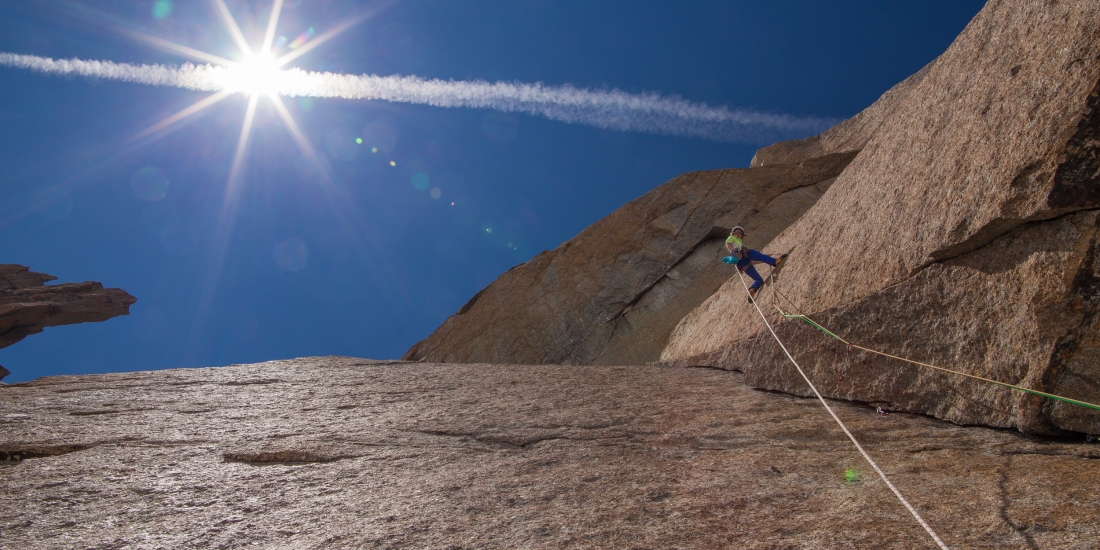 picture of the 7b+ from last year, thanks to Francisco Taranto

To say that I slept wonderfully would be exaggerated, but I made the most of my night to visualise the second part, trying to imagine struggling on the 8a pitch, the hardest of the top part. It has a reputation to be very technical, and hard to figure out. 6am start, and there I was after an easier pitch, at the foot of the 8a. It looked beautiful. Indeed it was technical, but I was patient, found the keys on each movements, then lowered to the bottom of the pitch, and climbed it. I was focused, and mistakes didn’t matter, because there was this enormous bubble of motivation behind me. There was only a few easier pitches and a 7b+ between me an a success, and part of me knew at that point that I had it. But I focused on every proposition one after the other, had to redo the 7b+ twice to succeed it, and reached the summit. That was it, It was done, officially. My big one year dream had become a reality.

I didn’t let the joy explode yet. After 450 of climbing, we still had to abseil. The 3 of us were happy, and in complete harmony, but we knew we still had to remain focussed. Abseiling is the last page of a climbing story, but it has to be finished smoothly to make for a happy end – when you are tired, mistakes can happen all too easily.

We reached the bottom of the face, walked back to the telepherique, and had to wait a night in the refuge before finally getting down the mountain. Today it is all settling, sinking in. I have done it, with James, and Marion, and Arnaud, and Steph, and all the people who deeply wished me to succeed. It is the end of an adventure that started a year ago, and I will write in my “memories” notebook every little adventure of the big adventure: I learned granite climbing in La Pedriza, I trained my mental strength on the daring English trad routes, I spent a lot of hours in my home gym, holding onto one more hold, one more second, because it is the sum of all little things that would, and did, make the difference. I did it. And it will always be there, as my most daring project, transformed into a success, with all these people pushing me. 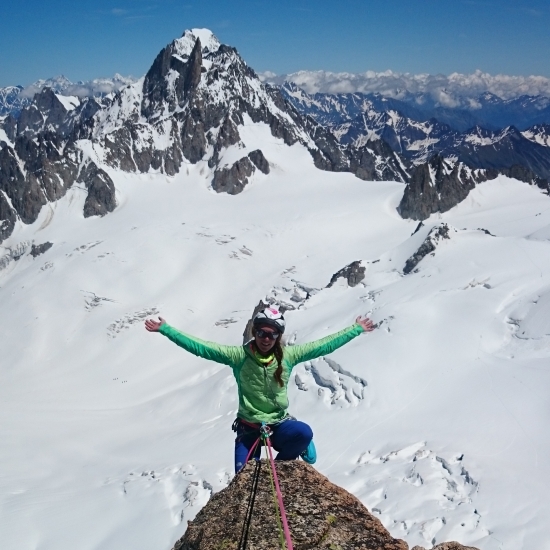 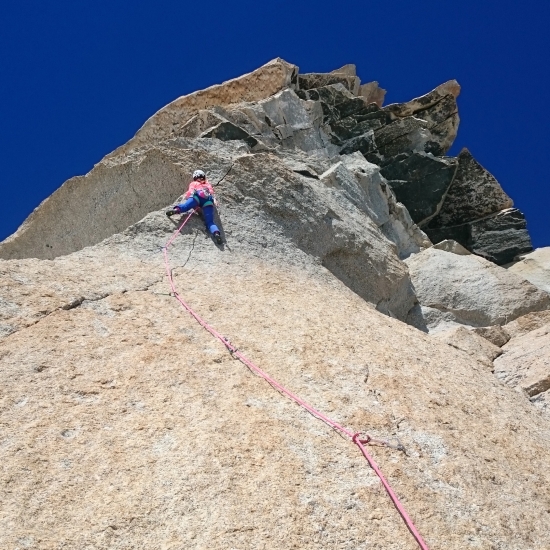 The 8a, pitch number 9. Technical and magnificent.

Facts about the route: 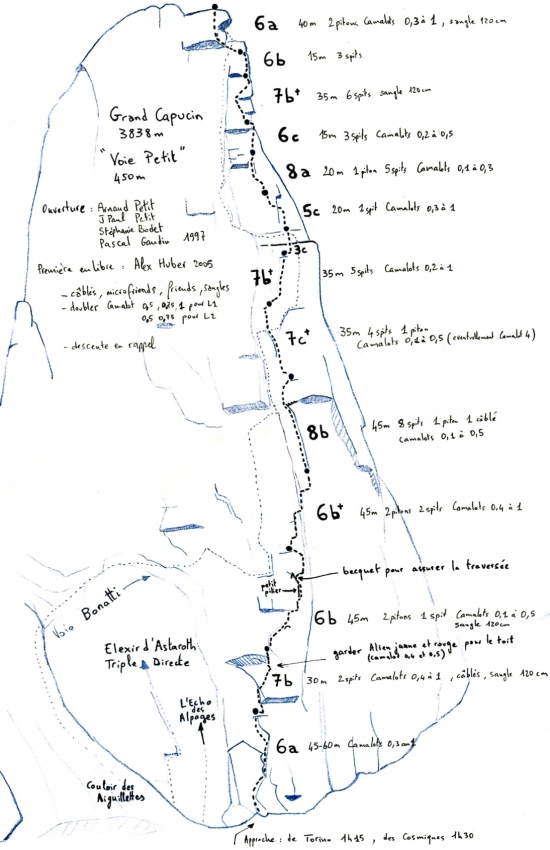 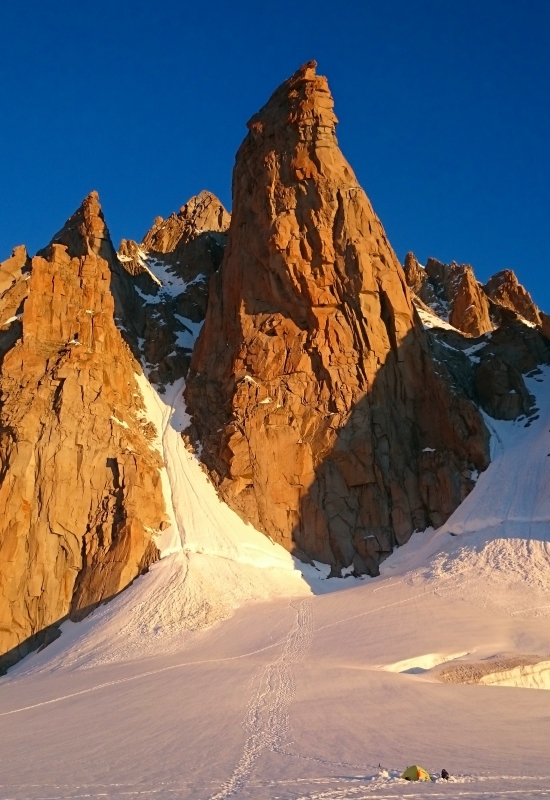 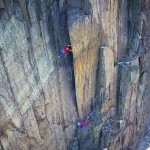 Slate of the ArtExpedition, Training, Travel