A quest and a travel

All pics are from Eddie Gianelloni or Caroline 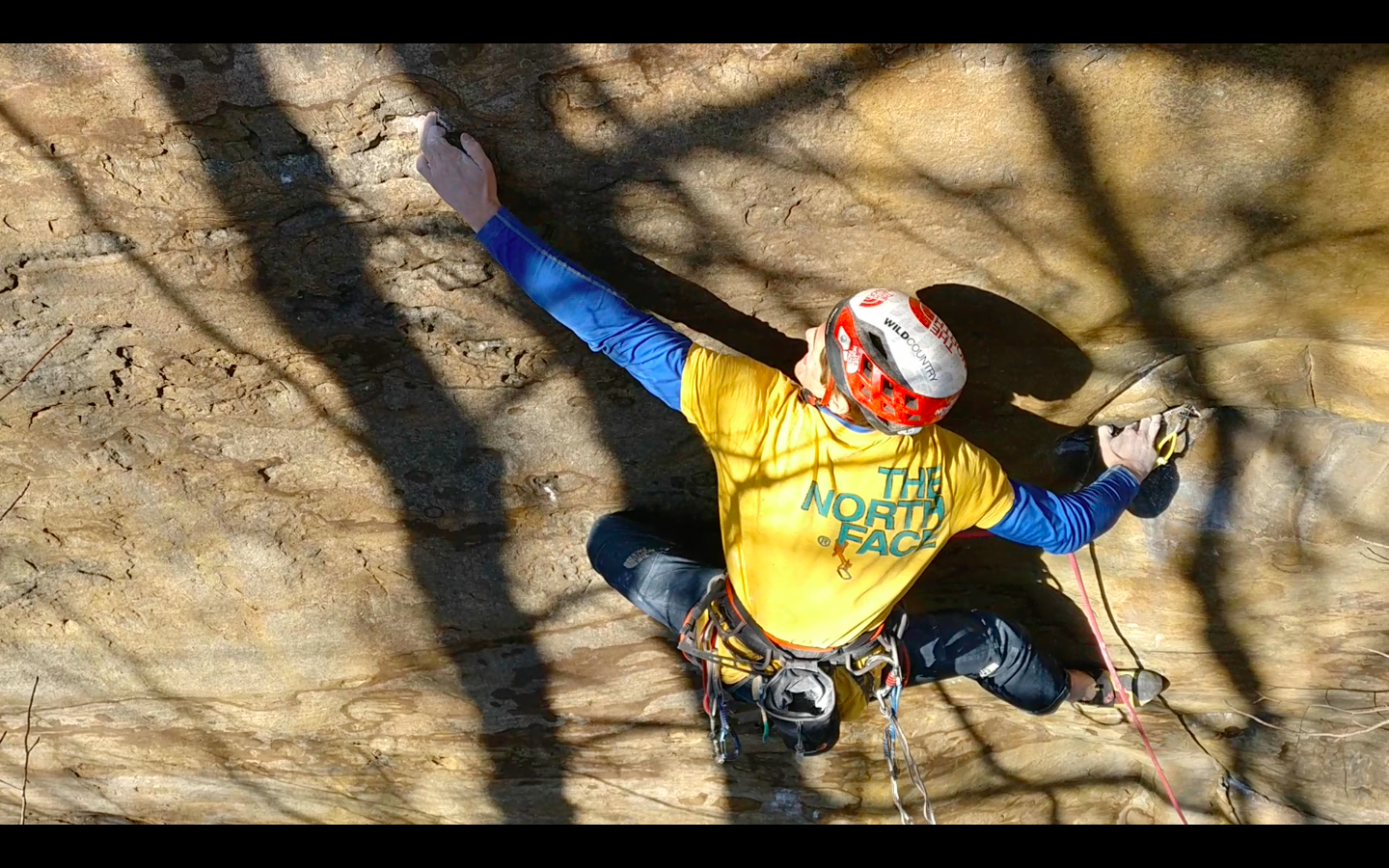 You don’t judge a country on its president.

Yet a country, in theory, elects its president to represent it.

It is fair to say that with all the worry brought by the last year of elections and referendi, we all had lots to think and talk about. People who didn’t really worry, or question politics have been thrown into the storm. The one first good outcome of all this is that for the still coming elections -in France, as far as I am concerned- we all listen just a little bit more, and for the very first time I have read every political program.

I was very curious to discover the Southern states of the USA, the Red states, where Trump won so overwhelmingly. In Europe the medias have a lot of fun picturing the US president as a clown. It is a great temptation to put into one box all Americans, and laugh. Laughing stops us from worrying at least.

But at the same time, we are all aware that things are obviously not as simple as: “Americans are crazy”.

You read, hear a lot from the media, but first hand view is something else, and both James and I wanted badly to go to Georgia, Tenessee and West Virginia to meet people, to ask, to see and hopefully understand.

Well… I was keen mainly for the travel opportunity, James had one obsession: the rock.

We are both climbers, and Once Upon A climb never talks politics, because we don’t know much about it. Until now, we have left it all to journalists. But at 30 years old, both James and I have grown old of loving one God only, the rock. We love climbing, but there is a world turning around us… hem… actually we are turning with the world, and questioning only boulder problems, methods, or trad placements… isn’t enough anymore. I can still remember my first eye openings… they actually happened when I started hearing about the climbing history in Llanberis, slates quarries, Wales. There, climbing history became simple history, to understand why the quarries happened, why they got abandoned and left to climbers… I learned what “the industrial revolution”, that thing I had read of at school meant in reality for some. And now I am just curious. So on the plane to Atlanta, I was curious to know: what was the local history, the economical situation, and what was it that Trump promised that seduced so many people.

James is a complicated character, a butterfly I like to say, but just as he influences me, I influence him. He was curious of the same questions, but before all, he had one obsession. Curious, how you can be aware of your own insignificance as a one single human being, and of the final futility of climbing, and how at the same time, rock can still obsess you. Well, after all, we only see the world only after we see ourseves. 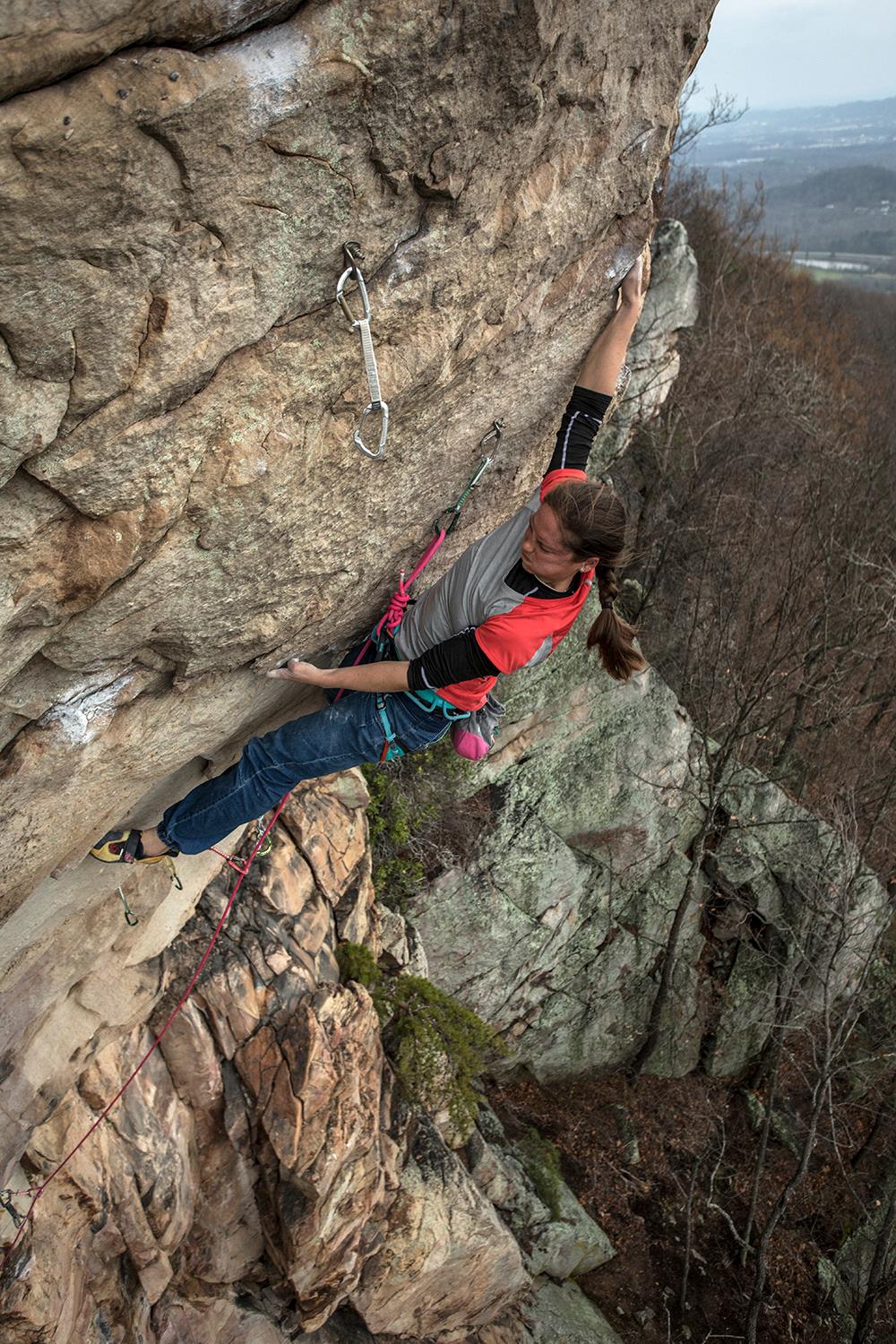 sport or trad?Caro on the beginning of the Flipper Arete

James is 31 now, and I have known for a while that he “would like to find his next level in trad”. It’s always been there, since he did the Walk of life. At 22 he could only translate that into a grade, a difficulty, and a “result” to propose to the climbing world. We all know how that story ended (maybe not actually:) well, it is all in the movie Redemption), but the obsession remained, just differently. At 31, he is no longer searching for ‘the’ next level, but ‘his’ next level”. What does that mean? That having digested the vastness of the climbing world, and the impossibility to accurately grade, judge, compare routes, James is only searching for the one route that could remain in his climbing career as his proudest achievement. Whatever grade it will finally be doesn’t really enter in the quest. What James’ obsession is, is to find the project of his dream, therefor in a style that suits him, so that he can be the very best he is able to be, and then train for it, work on it, until he can finally have his dream in his hands… maybe

It’s been 3 years now that James is seriously searching. Or at least, it’s been 3 years that James has involved me into his mad quest. For two reasons I assume: First, the clock is ticking. Realistically, there are only so many years where a climber can be at his absolute best… The human body has its limits, and physical tip of the shape may be more in the late twenties. But climbing is mentally very complex, trad even more, and it might be only now, that, having sampled diverse styles, learned from diverse experiences, and having finally been able to put words on his dreams, that James can be the most efficient, knowledgeable and motivated.

Secondly, searching for the exact piece of rock that will correspond to what you dreamed of in your most delirious wanders is an arduous task. James wants sandstone, because he finds that this is the most beautiful rock, but also because slight overhang, or even balance propositions are his best style. You love what you are good at….and you are good at what you love.

He wants a bit of air/ translate into a bit of risk. And that is a tricky one. At 32 you are not mad anymore, you know exactly what amount of risk you can afford. James is bold, but at the same time, he knows that crazy bold won’t do. Because I am married to him, and I would have to pick him up. And he cares about me.

So 3 years ago, James started to trust me enough to share his dream with me, and we have started wandering, first to Rocklands, then the Cederberg, and finally to the southern USA. 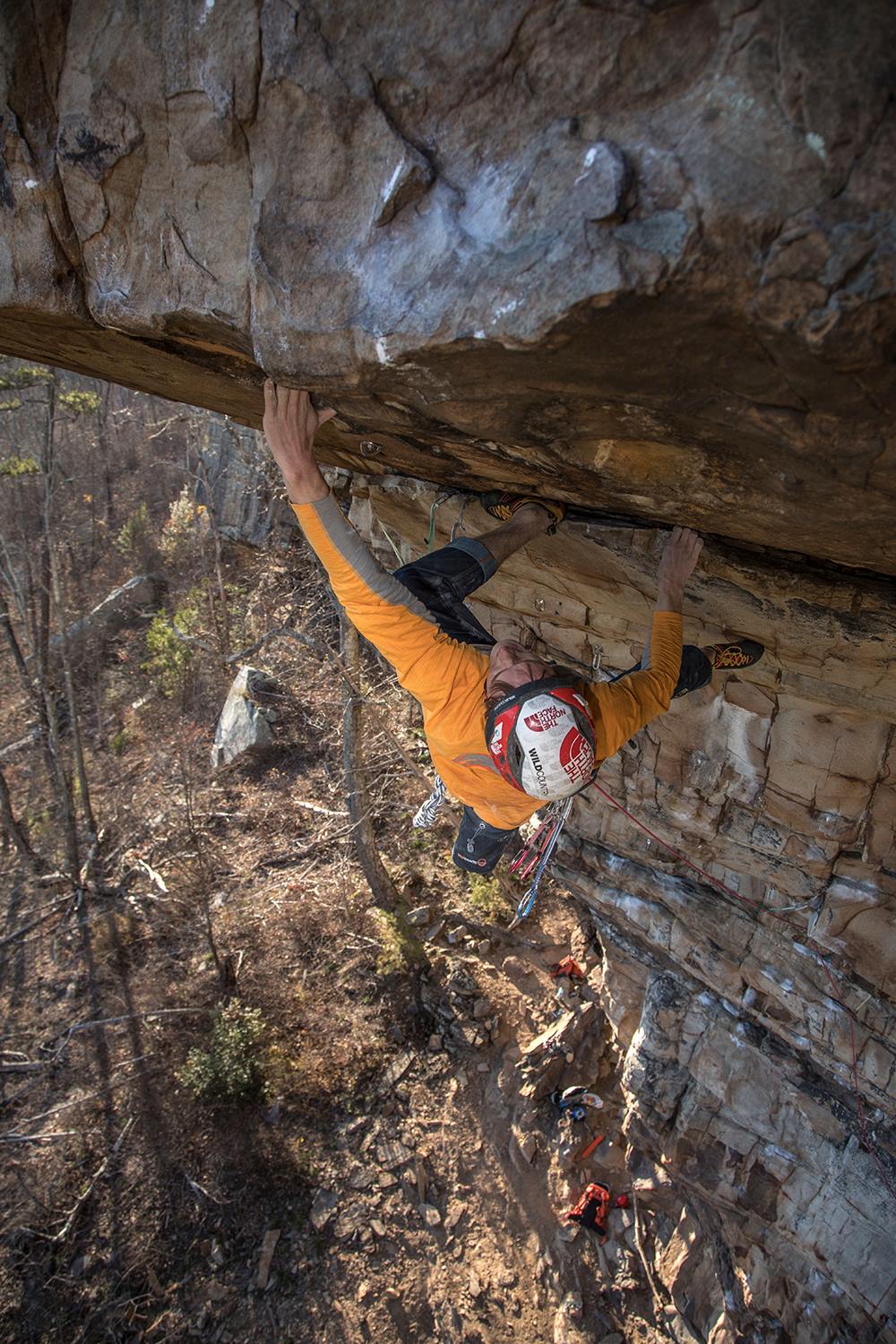 James green climbing The Messenger, 8b+A big roof in Tennessee wall, the last gear on the flake below the roof.... Falling promised a good air time... so James didn't fall:)

I can’t count anymore the time we have spent walking to either virgin crags, abseiling on a promising line, cleaning, hoping, being disappointed… or searching for remaining projects. That is the very difficult part of James’ dream: we have to find his line. I say we, because I have to be his belay buddy, his sparing partner, his cheerleader. He could maybe do that without me… or maybe not.

We have been camping in the wild, crossing our fingers to avoid poisonous snakes in Africa, or any accident that would be serious while we are so totally off the grid.

In South Africa, we have searched. Walked, climbed, hiked, tried. James has found some very hard looking routes. He has even found one project that would be just about as hard as he wants. He has worked the movements. Pockets, a roof, a huge dyno…But it’s not his best style. That project will surely be one day a route. But it won’t be James’ route. In South Africa , in that quest, we failed. But we discovered South Africa. We got to meet the younger generation, lots of South Africans who live the heritage of the apartheid and Nelson Mandela. All of them have hope for their country. For what we have seen, the more educated, richer “whites” sincerely try to help their poorer, less educated co-nationals to build themselves a future. We have met the “Rockland Rangers” an initiative to offer climbing to the kids of the very poor workers of Rockland. We have listened to their worry towards the political situation in South Africa. Travelling is about being transported into a different reality. I often say that I can feel my brain shifting. It has been, to say the least, an adventure.

This year it was southern USA, where James, after so many researches on the net, had decided to try his luck. We searched around Chattanooga, and the new river gorge. What did we find? So much rock. And a great quality of sandstone. And a lot of space for new lines.

James is convinced that his route is there. 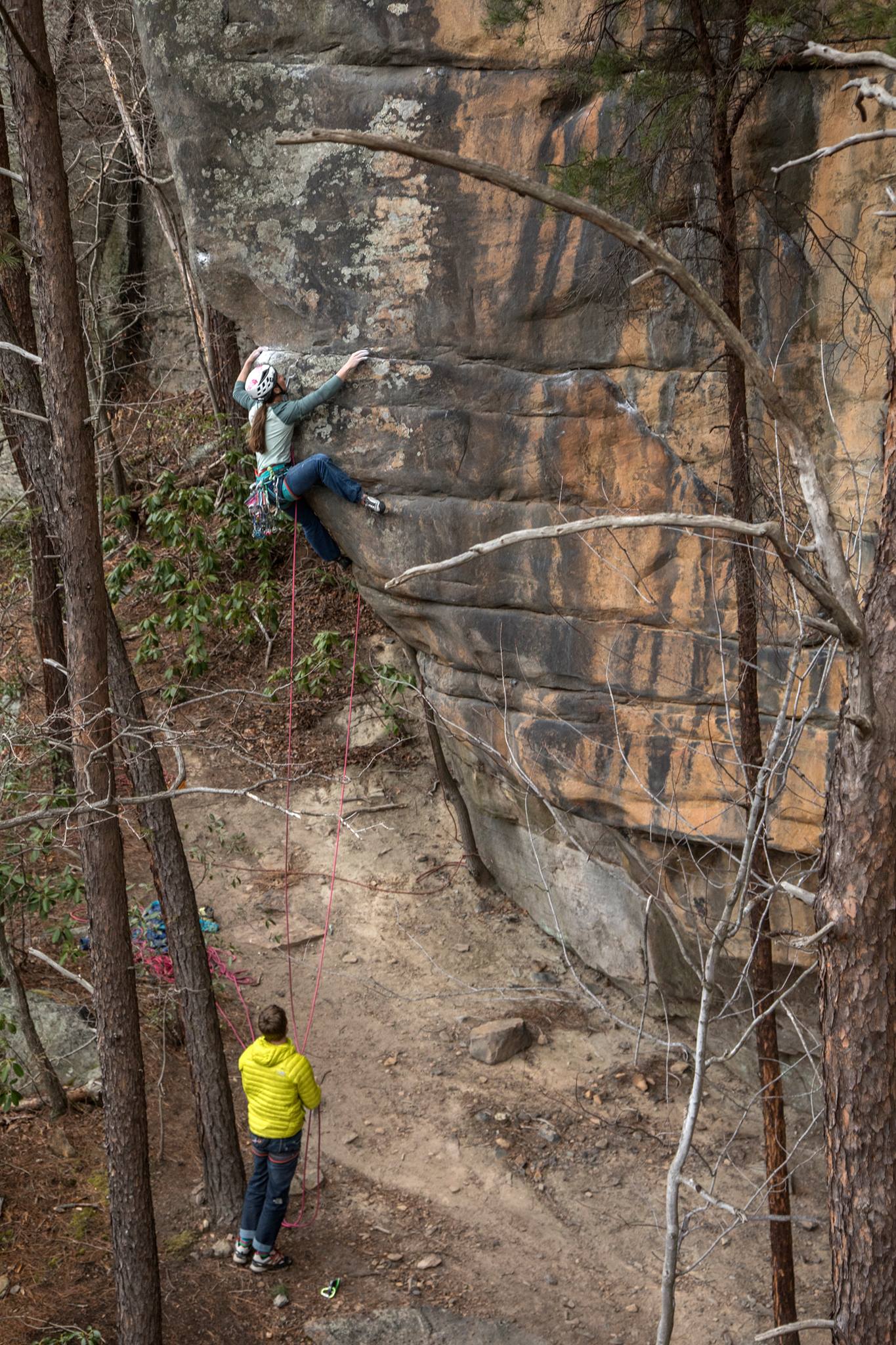 Caro doing a great little 5.13a in Fern Buttress, New river Gorgea slider, a little nut, and cam for the crux... finally she was pumped placing the gear, but happy to commit!

And he has found something. Maybe. Maybe it’s not hard enough, maybe it’s too hard. He has spent a bit of time on the route, he has tried the movements, and now, going home, he’ll have the time to train with this piece of rock in his mind.

We have found several lines, because we have had help, just as we did in South Africa. Local climbers have pointed us to unclimbed projects, virgin walls. We have had the chance to meet amazing people, to talk about their lives and the various American system.

USA, so similar on paper to Europe, is an other reality: next to no social security, no good health access or good education for poor people. The land of freedom is definitely not a social country. We have seen guns on sale in supermarket, plastic bags distributed without much concern about ecology. We have talked with American friends about creationism, global warming, and the refusal to acknowledge scientific facts by a fair portion of the society. I would like to not take sides, but I am a biology student. Both later maters are, to me, realities. But I can see why some Americans have to refuse them: because they don’t get given the possibilities to handle these realities.

Free market gives infinite possibilities to the smarts, the brilliants, and at the same time it has its limits, and we are starting to touch them. I believe that we could build a world more focused on personal development, and this starts with education, and access to health.

Am I digressing? Maybe. I am just a climber after all, not a journalist. But at the same time, I travel. I get to see different realities thanks to the world climbing community. And that is a reality: wherever you go, climbers will welcome you as a friend on the sole reason that you climb too. And by letting you into their world, they propose you such a higher experience of travelling, that you will surely, every now and again, feel you brain “shifting”, your values wobble, your knowledge of right and wrong evolve, your tolerance raise. That is the big gift that climbing gives us all. A bigger world.

That is why I thought for once, I would share with you not only the climbing, but as well the life that I have discovered on our latest travel.

We went to the USA to discover the place and touch the rock…and we have a promise: we’ll be back. 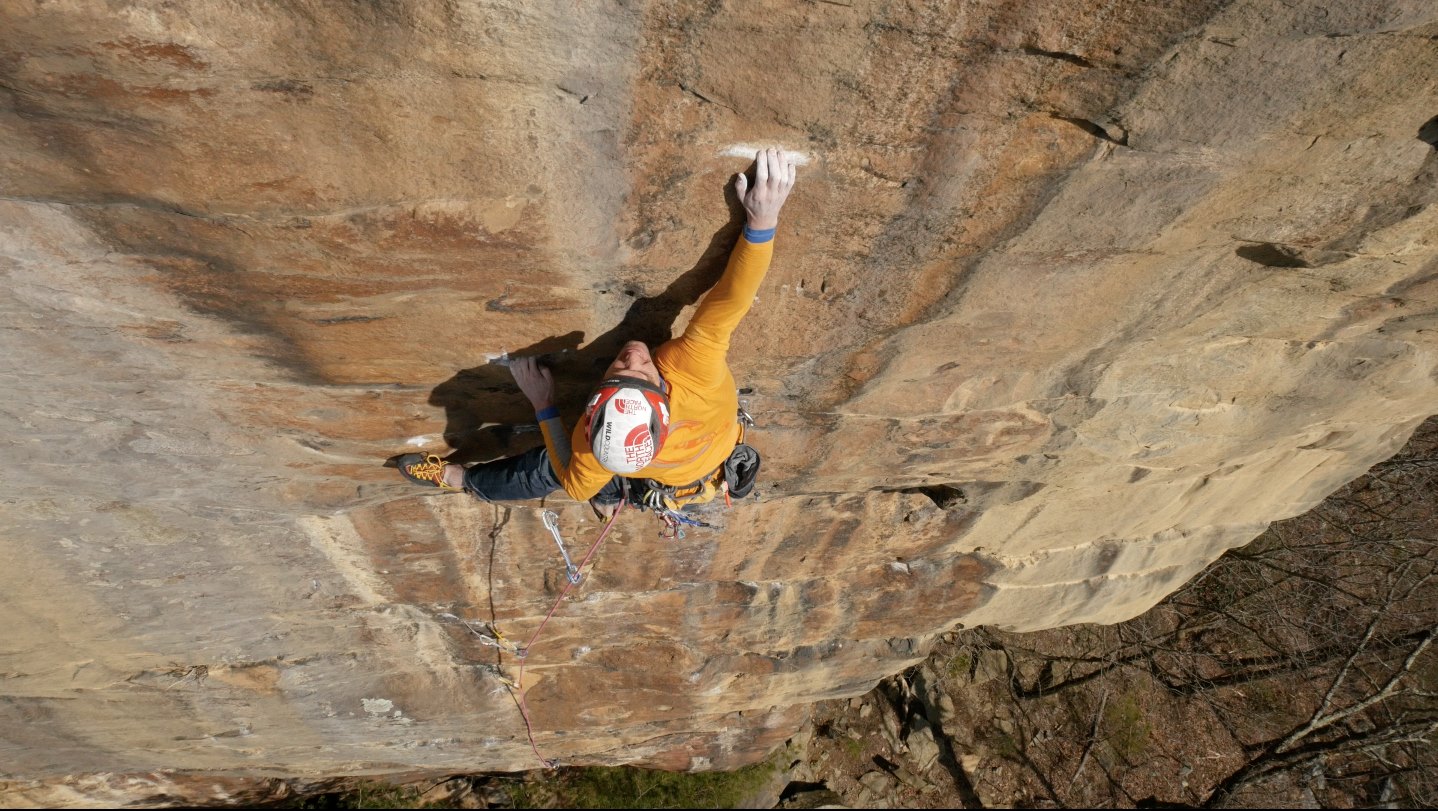 James makes the first ascent of "not just a pretty face", 8b ish, E9 ish"There was a blank wall just next to "The eye of the Beholder"... I couldn't resist! "
Related Projects 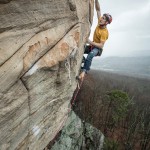 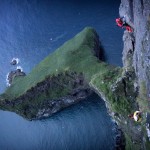