Our 2012 project in Sardinia began with little expectations, but grew into one of our most educational and inspirational experiences, and is a time Caroline and I will never forget. Amongst climbing several incredible multi-pitch routes and immersing ourselves in the local culture and cuisine, we made some friendships that would define our future direction in climbing, and last a lifetime.

It’s 6pm, the end of an incredible day of may. James and I are standing on top of a 350m wall above the Mediterranean. We just spent 9 hours in Aria, with the equipper of this unknown and magic route: Pietro dal Pra. Sat next to the massive Kairn that immortalize the summit of Plumare, I am fully enjoying the pleaser of the “well done job”. My hands, feet, arms, my entire body aches, I am starving, but so happy to have been part of this great adventure that is a multi pitch!
A few months ago, James and I got our heads into the multi pitch world, decided to try the game. We come from very opposite worlds: James is by essence an English trad climber, something very special, a mix of courage, craziness on a rock that you protect only with gears. I come from the competition world. Two opposite worlds as I said. After 2 years stepping into each other world, it was time for a common project, multi pitches seemed like a cross way: not that dangerous, but spicy enough for both of us to have fun.
Starting multi pitch, it meant: learning to deal with rope works, getting efficient in installing/cleaning the belays, getting ready for horrendous approach walks (ok, maybe at the very worst 2 hours, but that’s actually horrendous to me)…And of course, being ready to reach a new level of emotions! The real question we wanted to answer to while going to Sardinia, was: would we like it?
There we were, going for a month of multi pitch in Sardinia, and we were about to learn a lot, barbarian style: “I have no idea how to do this thing, but I am doing it!” 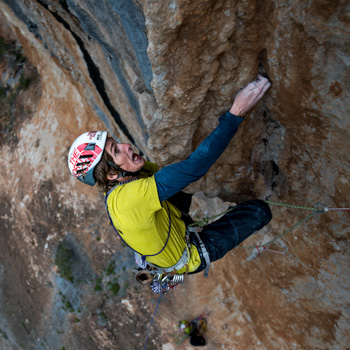 Amico Fragile, fire baptism…
Freshly arrived from the continent, as they seem to say in Sardinia, we drove down a valley completely lost, as any valley in Sardinia we would discover, peopled only of pigs, goats, horses, and cows wandering freely in the bushes. The route is in pieces, big chunks missing sometimes, but we manage to make our way to our goal with our WWT4 recently transformed into a gipsy home. Cordula di Luna, very end of the road.
The first challenge is to find the access, luckily, psyched as we were on this very first day, we have checked it the day before, ending up on 4 legs in a screslope, to finally discover an ok path. Amico Fragile is a “small “multipitch: 6 pitches including an 8b (easy for the grade), a very dirty 7c, and some 6s. From the road, the 8 pitch seems to be asking to be climbed, with its graceful colos. I guess that’s what attracted Marco Vago. The other pitches are quite average, with two dangerous 6, a very dirty end, but the 8 on its own definitely deserves a visit! At the end of the day, what I will remember of Amico, is the 8b pitch, amazing, but most of all the cold in my blood when we decided, at 8.30 pm, on top of the route, to abseil it in the dark with just one head torch: we hadn’t found the easy “linia blau” to abseil, and we had only one other option: sleeping up there in the cold. No stuck rope at the end (luckily), but 4 hours to go down, reclipping by swinging in the dark overhang to catch the belays, checking my manips 500times. Some moments where I doulbted we would make it till the end of the night, but at midnight, after a last half hour hiking back and praying that the head torch wouldn’t give up, we could finally collapse in our van, having learned one or two things:
-Do Not start a multi-pitch after 11.
-Always have two working head torches
-Put a lighter in the bottom of the bag.
Stronger with our new learned knowledge and a deserved rest day when James decided to put the van in pieces to (so he said) improve the bed system (&^%$&, I can’t believe this MacGyver thing you boys have in the blood), we focused on our next game:

“Mezziogiorno di Fuoco”, the baby of Rolando Larcher and co.
Vigiani describes it about like that: “it will be difficult to find another route that so perfectly combines beauty and difficulty.” Pietro dal Pra encouraged us too: do not worry, with this route, you bet right!

Man must still manage to find it: in Sardinia, the indications panel are definitely not fashion, we have since the start of the trip developed a research tactic: the day before each climbing day is dedicated to research, going back and forth, calling every Sardinian climber available … and we end up (so far) by finding our needle in the haystack.
Remains to go for it now, the route is also known for its commitment / exposure … well … worst case, I’m gonna cry, eh nothing dramatic!

9 AM, we were at the foot of the route, 7 pitches to go: 7a +, 8b, 6c, 8a / +, 7c +, 7c, 7a. On the very first, I discovered an unusual pressure: given the length of the route and its difficulty, I would maybe stand a chance to do it in the day … if I did not waist any idiot try!
The 8b, which I started to work bolt to bolt, happened to be very hard for me, really too much for my taste. But nothing like the success of James flash, as an electroshock: I would make it! A few grunts later, it was an old story for me too. Phew!
James does the 6c, said EXPO … not for nothing, with almost 10 meters between points, the bolters didn’t joke!
8a / + … after a false start, I launch myself into a huge fight, physical and mental, with big spaces between bolts at the end, the hardest part is finding the line. Last hard section just to reach the belay, but there is no way I do the pitch twice! And I do it! No need to tell that James cruised it too.
7c +: really hard to find the holds, with not a trace of magnesia the first wanders completely, fortunately it was James, as a second it happens much more easily!
7c … this time it’s my turn to open the ball. I’m starting to seriously lack strength / power endurance / endurance … I need 5 tries to finally make my way up the 7c, having fallen exploded in 2 seconds, to lower of, start again… I would almost laugh at it, except that the last 7a might not seem very funny to me …
Finally, the 7a flows, with still some grumbling!

Appraisal: James made the 7 lengths flash or on sight, and I made them all too!
7:30 pm, we still have a little tough time walking back on an impressive arête toward the van, fortunately there is still daylight, no epic for that last part.
11h of effort in total, I cannot even count how many pitches I made in the end! It was really a great adventure. Thank you to the route setters, a masterpiece they have made with this jewel.

We treated ourselves with a good restaurant in Baunei, tourist menu!!! Pig tongue (very fat, very good), donkey steak, gorgonzola gnocchi and Panna cota. God the meat is something special in Sardinia!
A few days later, with sport climbing in Cala Fuili as rest days, we were joined by Ricky Felderer and Pietro Porro, photographs and cameramen, but most of all very good friends who would introduce us to the spit roasted piglet!!! And the home made rotten cheese cream(eurk).
Aria was going to be the new game, and for this one, Pietro Dal Pra, Aria’s “daddy”, had decided to come with us, officially to revisit his baby. 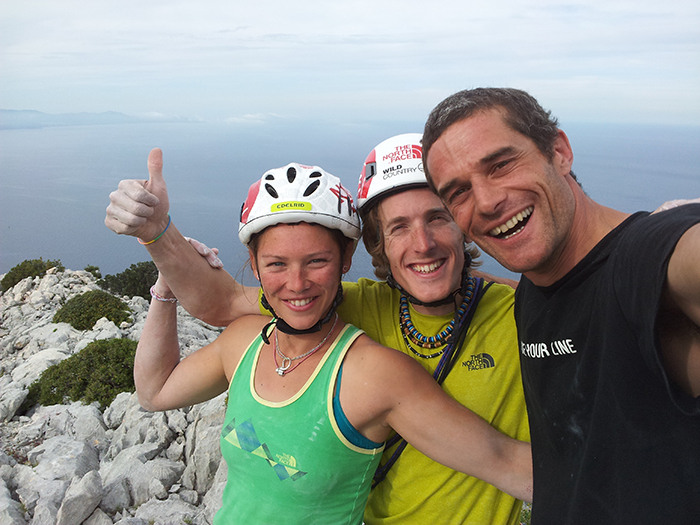 A precious moment on top of Aria…

Aria, the well named
On paper, the route seems quite ordinary, 350m, 10 pitches, 7c, 7a, 6c +, 6c +, 6c +, 8a +, 8a +, 6c +, 7b +, 7a. In real, Aria in anything but ordinary. It’s the only path up the Punta Plumare, right above the sea, and despite pitches over 45m, you can do it with 6 quickdraws! Terrifying!!!
Lots of common points with a dangerous English trad route, there are places where falling is not an option, or you would land on a terrace or on a colo field. James proposes to take the lead of the hard pitches, and I am more that relived at his offer. After a few troubles with wet tuffas on our first day, we end up freeing every pitch on an exceptional day. I will keep in mind the first 8a+, hard and incredible, with and end chemineeing up between two tuffas. Pierto will admit afterwards that he came because he didn’t want to feel responsible in case something happened to us! Indeed, with such spaced spits in an overhang, you can’t go down half way, you have to finish the route! And James and I were really relived to have next to us Pietro and his years of experience as a mountain guide! Ricky and Pipi (the little Pietro) are hanging far away in the air on their statics, and they don’t seem entirely confident either!
The day will end at the very top of Aria, a really wild place, and a very moving moment above the sea. We came here hoping for a fun day, hoping we would learn the art of multi pitch and grab a few advices from Pietro, what we found is the soul of Aria. With Pietro jumaring next to us, pitch after pitch, indicating which direction to take to reach the next far away spit (8m above roughly), telling us the story of the opening, his freaking moments with the drill, we are discovering the real meaning of Aria, as much as we are discovering Pierto. Here, in this wild island that is Sardinia, on Punta Plumare, with the sea at our feel and the wild land behind us, we found our answer… Between the multipiches and us, it will be a love story! 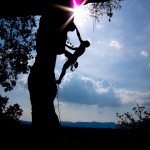 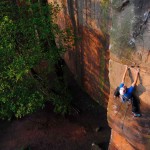