Before we begin this interview, a little bit of context is needed… Martina Cufar is simply the 2001 lead World Champion. She was maybe the first “Slovenian never falling competition climber”, and despite her humility, she has clearly opened the path to what we call today “the Slovenian armada”, Natalia gros, Maja Vidmar… and of course Janja Garnbret! Females role models are essentiels, and Martina is clearly one of them! 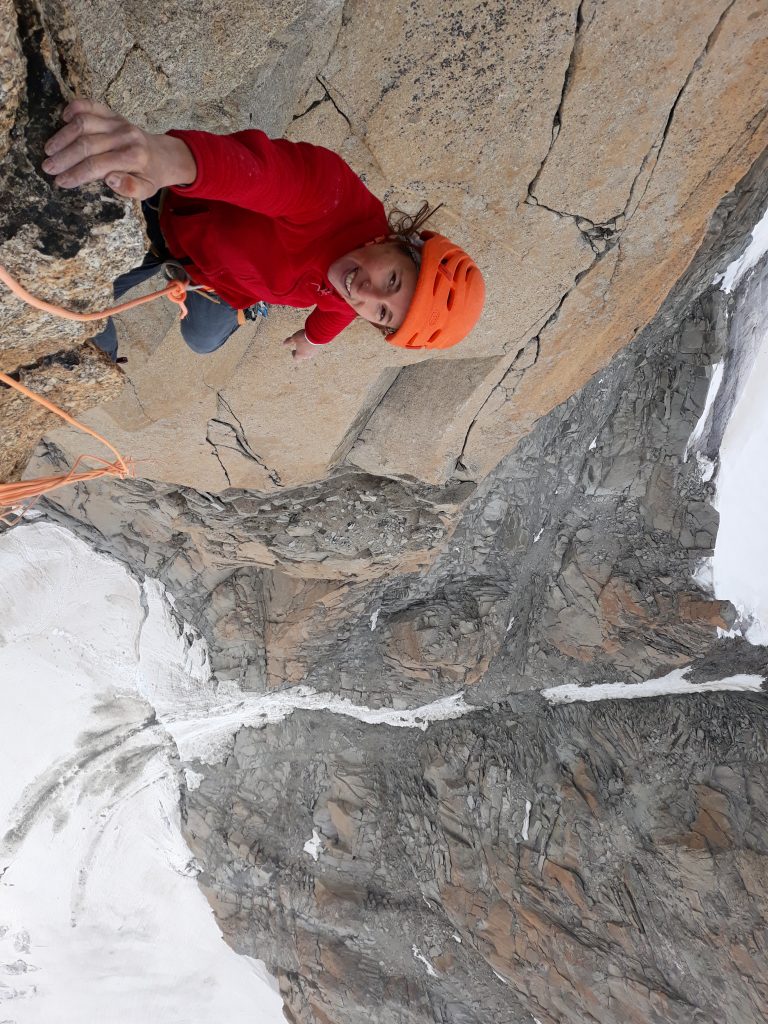 Hello Martina, thanks for having accepted to be part of our blog! You are one of the most inspiring climbers, but most of all among mom climbers! You managed to keep climbing to high levels after having had two children (Tommy and Paco): how have you lived the changes of your body during pregnancy and after the births and how long have you been resting for(=not climbing)?

Hello! It’s with a pleasure to share my experience with you…even though it’s already a bit far away my last pregnancy…and I might forgot some details. Paco and Tommy are now 5 and 8.5 years old. I remember I really had strong nauseas during both pregnancies, so instead of gaining weigh I lost it…5-6 kg in the first three months.. Climbing helped me forget the nauseas and felling at least a bit hungry:)

At 7-8 months I only had 1-2 kg more than my normal weight, so climbing didn’t felt hard, I kept climbing until giving birth…on top rope of course.

After birth I started slowly 2 weeks after, on the slabs to not harm my abdominal muscles… I did my first 8a 2 months after giving birth… So no, I didn’t really stop, I love climbing too much and it feels soo good for my body.

How did your children positively change the game?

Of course after having children your life focus change a bit. But still I realized that you can’t spend 100% of time only with your baby, you need time for you too. What we learned with Nico (my husband) is better organization and most of all being more efficient at the crag, spending less time on the routes, climbing faster! Or course we climb less than before, but we appreciate this time more. 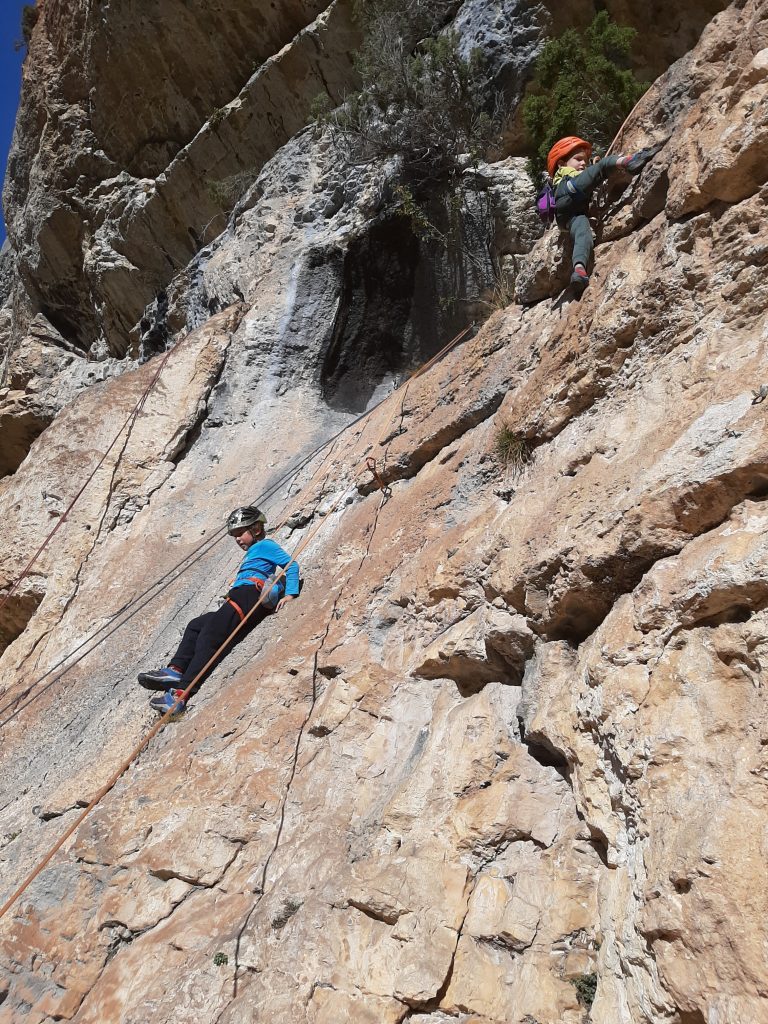 Kidos at the crag

You have done your second 8c route after having had your second child: the process of trying this route has been different from the past in some ways?

My second 8c was a bit special, yes. I usually don’t like to work on the routes for a long time, but this one was the only route that I hadn’t done at the crag that is one of the closest from our home, it’s nice and sunny, I like the place. So I started to work on it in order to have a motivation to come at that crag. Second motivation was too see if after 2 kids I and still climb hard… The hardest in fact was to find the time to go to work on the route in the good weather conditions. I had a period when I was thinking only about the route, watching the weather forcast, temperetures and sendig text messages to find the people to go with me. I felt somehow guilty not to have energy and concentration for the kids…I felt kind of egoiste. So when the route was done, of course I was happy, but I didn’t want to give myself another big project like this, it’ takes too much of mental energy to organize everything. I am happy to climb on sight or the routes that take two or three days of work..

Let’s talk about practice! Do you go climbing all together?

It doesn’t happen very often. The kids were under the wall only the first months, when I was breastfeeding them. Then we try to organize ourselves that we climb with friends ,one staying at home. The boys don’t like climbing so much, and they really don’t like to walk. So if we go, it’s to climb one easy route and then to do a big swing… its not easy to find a place with not more than 10 min approach, with easy routes and steep ones to do the swing!

We don’t want to force them to climb, but I must say that we I lucky to have a super mother in law…We leave the kids at hers or she goes with us for the vacation to Buoux, Verdon, Monaco, Leonidio…we do some beach at the morning and then we go climbing without the kids.

Sometimes we go like a big team; three families with 6 kids…and we are making turns climbing and entertaining (watching) kids.

To be short…I am not fun of having kids under the crag…especially because it’s never really kids friendy cliff where we like to climb the most. They know how climbing is, they see our passion, they tried some times and if they ask me to take them climbing (it happens sometimes that they ask me to take them on the artificial wall, but after 2 routes they prefere to play with other things), I will, with a pleasure, but I don’t want to force them.

How do you organize the day at the crag in order not to have the children getting bored after the first hours?

I wrote a lot in the upper answer. If we really want to go climbing with them, then it’s a big mission….taking a lot of toys, crash pads so they play under the wall and then we promise them a swin or two. Or we really go for a short time, and we do some other activities after…swimming in a lake or something. 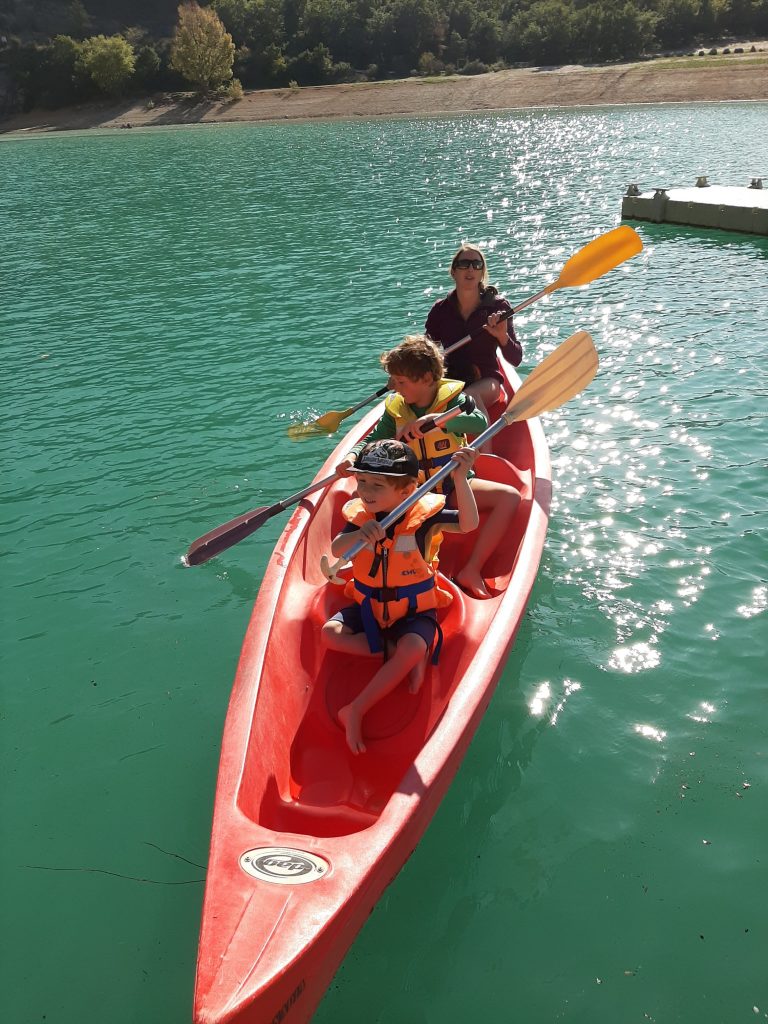 And what about the indoor training?

Indoor training is easy, because it takes less time.. In 1,5h I have my doseJNow when the kids are in school I climb indoor during the school time. Sometimes I give climbing courses for the kids and that are the moment than suddenly my boys become motivated, when they see other kids climbing. So they climb a bit after I finished my work.

Do you have the time just for your own or do you share your training time with the kids playing around?

If it’s possible I try to train and climb without the kids. It’s more efficient and less stressful (being at the cliff with them it’s always more stressful then without) I prefer not to climb for some days or doing really short sessions than to put myself the missions to drag them to the cliffs…especially if they are not motivated!

For example…we were at Monaco for the new year…the weather was perfect, so we were on the beach. It was impossible to say” let’s go climbing boys” They enjoyed so much in the sand doing castles and playing with the waves  …so we left them there (with my mother in law) and did 3 routes before the night.

It is possible to keep a training routine like before with strict scheduling?

No, it’s not possible.As I said, climbing is my passion, so I don’t really train, I just try to enjoy the opportunities when I can climb and get the most I can from it.

One last word for all those girls out there really worried to “lose their climbing grade” by having a child!

You might lose some climbing time, but with the motivation you get your level back very fast.  And most of all having kids teaches to be organized, fast and efficient and mentally stronger then before. 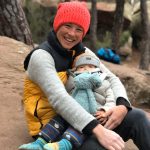 Year 1: What have we done?!Expedition, parents and climbers, Thoughts, Travel